Written by: Emily Cartwright (2015)
Editor: Raffael Dudler (Dudler Herbal, July 2016).
(We acknowledge and thank Lincoln College for their support in sharing this monograph for educational purposes). 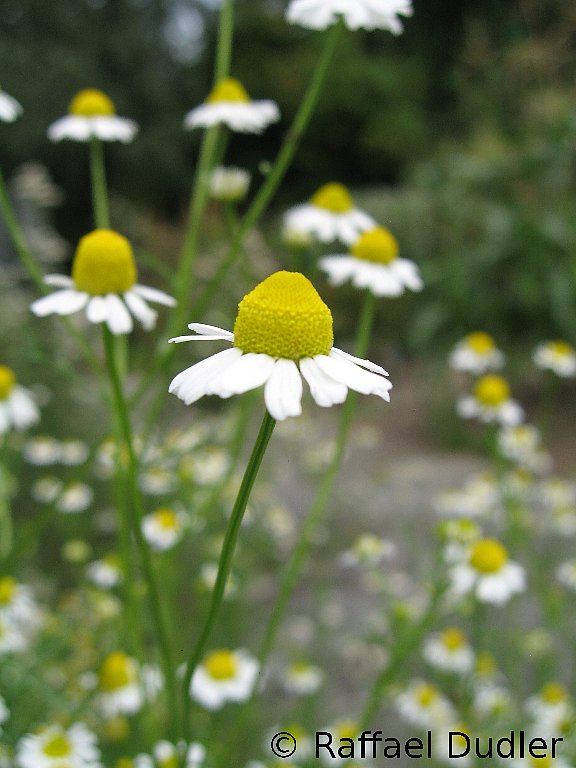 Chamomilla recutita L. is a member of the Asteraceae/Compositae family (Epel, 2013, p 169). The Chamomile tribe is known to be the most fragrant plants of the Aster family and they also have another distinguishing feature, which is that their bracts surrounding the flower head are usually thin, dry and translucent (this translucency is more visible when dried)

Chamomilla.recutita, is native to Europe and some North Western areas of Asia but it has been widely introduced to North America and Australia. Growing annually, it can often be seen growing at the sides of roads, landfills and on cultivated open soil (Williamson and Wren, 2003, p 110).

The phytochemical constituents of Chamomilla Recutita are: Volatile oils, flavonoids, spiroethers, coumarins, and polysaccharides. Matricin, a chemical constituent from C Chamomilla.recutita is known for its anti-inflammatory proprieties. This essential oil is a deep blue colour which is called chamazulene. It is formed during through a steam distillation process. (Barker, 2001, p 464)

Chamomilla Recutita L. has been used for its medicinal benefits for thousands of years and by Ancient Romans, Greeks and Egyptians (Lissandrello, 2008). It is considered to be one of the most popular herbs in Western Herbal medicine. However, there are a few different Chamomile plants, such as Matricaria recutita and Chamaemelum nobile, with similar healing properties. It is believed Chamomile can be used in almost any minor ailment or accident situation (Holmes, 2007, p 517).

It is known to be an anti-inflammatory, anti-spasmodic, analgesic, antiseptic, carminative, sedative, antimicrobial, diaphoretic and antallergic herb (Barker, 2001, p 463). Its most traditional use (Bruneton and Hatton, 2008, p 523) is to treat those suffering from
gastrointestinal pain or irritation such as indigestion, flatulence, diarrhoea, and nausea and to stimulate the appetite.

In an uncontrolled study of 104 patients with non-specific gastrointestinal complaints were treated with a aqueous-ethanol preparation of Chamomile recutita. The patients took a dose of 25 drops four times a day (diluted in a cup of hot water) for duration of 6 weeks. Symptoms of said patients (such as stomach and abdominal pain, burping, fullness, nausea and vomiting) had completely disappeared in 44.2% of patients. “The success rate of a single symptom ranged from 61% for loss of appetite to 84.5% for stomach and abdominal pain and 88.7% in nausea.” (Bone et al., 2012, pp. 481 – 482).

Chamomile Recutita, contains many different photochemical constituents eg., volatile oils alpha-bisabolol and matricin, both of which have significant anti-inflammatory properties (Williamson & Wren, 2003, p. 110), and reduces inflammation and swelling outside of the body when applied topically to the skin. Its vulnerary properties have been used traditionally also and have been applied to wounds, eczema, ulcers, gout, and skin irritation. Its anti-fungal properties have also made it useful in the treatment of various bacterial infections of the skin, oral and respiratory system (Barker, 2001, p 463).

As a diaphoretic it promotes sweating and reduces fever. It contains the antibacterial compound hippurate used for the treatment of infections brought on by the common cold or flu (Lissandrello, 2008).

Another main attributes of Chamomilla recutita is its calming effect on the nervous system. It has been well documented that its mild sedative properties which makes it the most commonly used tisane for an overall calming on the mind (Holmes, 2007, p 516) so used for restlessness, insomnia, irritability or stress it would have positive effect helping to calm and relax. This calming action within the body and its anti-spasmodic properties would aid someone who was suffering from dysmenorrhea helping to relieve abdominal cramps (Holmes, 2007, p 516).

Chamomilla recutita, also has mild expectorant properties making it good for the treatment of bronchitis, asthma and relief from an allergic reaction which could have caused a difficulty in breathing (Holmes, 2007, p 516).

It could also be noted that Chamomilla.recutita is also beneficial in the treatment of neuralgia, pain in muscles, joints, sinus pain and toothache because of its analgesic and anti neuralgic properties. Chamomilla recutita, taste can be both bitter and sweet (Holmes, 2007, pp. 515 – 516). The qualities of bitter and sweet, cool fevers and induce calmness. Sweetness is considered nourishing and soothing for the nervous system which could be described as an almost mothering/protective nature.

Safe use of herb

There are few safety precautions and warnings for Chamomilla recutita except (Bone et al., 2012, p483) that is it advised to be cautious for those that are sensitive or allergic to other members within the Asteraceae/Compositae plant family.

Williamson, E. M. & Wren, R. C. (2003) Potter’s Herbal Encyclopedia: The most modern and practical book for all those interested in the scientific as well as the traditional use of herbs in medicine, 2nd edition, United Kingdom, C.W. Daniel Company.